Well, what a year 2020….am I right?!!  I’ve been a little MIA lately….well, more than lately.  2020 was more than the pandemic here at our household.  So many things happened. Many sad things but also things that brought joy.  So if you don’t mind….indulge me a bit as I “exhale” all that has happened over the last year & why I titled this blog post “Looking Ahead!”

This site contains affiliate links which earn me a small commission but does not increase your price.

Let’s rewind a bit.  I’ll try to be brief….as I want this post to mostly center around moving forward, not dwelling on the past, but keeping in mind the trials we go through help us better to navigate in the future.

Last spring was met with much enthusiasm… we had full bookings well into summer for both our Airbnb’s.  I had lots of DIY projects ready to start.  Several blog posts in my head ready to be written.  Then…. well you know….Mid March hit and the world was faced with the pandemic.  We shut down both Airbnb’s and waited.

At the end of March, my Mother (who lives in our little garage apartment) had fallen and we had to have her whisked off in an ambulance to the ER, all alone.  We weren’t allowed to go with her.  She had broken her arm but fell hard on her back and head, so they ran all the tests to make sure no other injuries.  Finally sent her home.  She was managing ok but needed surgery soon.

April came the surgery, and she did not do so well after…but because of the virus threat, they wouldn’t keep her in hospital, so I brought her home with me.  She stayed for a month. She wasn’t walking well, so it was literally 24/7 care.  Thank heavens for such a wonderful husband who helped me.

HELP ON THE WAY

In May, our dearest friend Rose came to live with Mother 24/7 in the little apartment.  Rose is an amazing caretaker and we were so lucky she had an opening…we literally caught her just in time before she accepted a family in California to go and care for.  God truly sent Rose to us.  We are thankful for her husband as well, for doing without her for months at a time, allowing Rose to do what God has set before her.  Mother did wonderfully with Rose.  In fact, she became very pampered!

Mid June, the Ark and Creation Museum opened back up and guests started booking again.  Very slowly and few between, but with the new protocol of cleaning (most of which we already did on a regular basis), it did give us more time between the guests to clean and air out the homes.

July….this was the beginning of the difficult months ahead….but also where I drew my strength from.  Mother started having severe back pain….she’d had it ever since the fall, but they never found anything.  So we finally called the ambulance once again…. ER later called us….indeed her back was fractured, it just was so small before they never caught it, but moving around these past few months made it worse.  But they also found stage 4 cancer in her liver.  They gave her 1-2 weeks to live.  God had other plans…..

We finally brought her home after 2 wks in the hospital waiting to get her back fixed to relieve the severe pain.  The cancer wasn’t causing pain, thank heavens.  Rose was here to help….once again….24/7.  My brother came back up from Florida and stayed.  She lasted for 2 months.  And in that time, we spent every moment we could with her.  She felt good until the last week or so.  So many of her friends came to visit.  I brought out my son’s childhood teddy bear, with face mask donned and sat him on the couch to keep the 6′ social distance.  I think Mother got a kick out of the bear.

Now that she’s gone….and I’m finally settling in with what’s the next chapter of our life….I find joy.  True JOY.  Not joy that she’s gone….but I have no more worries about something happening in the night or if I’m out of town.  I am FULL of all sorts of projects I now want to do around our house.  And we have some very exciting future plans… so you’ll have to stay tuned for that!  But until then, thank you for letting me purge what has been on my heart.  Now….off to plan some more projects!! 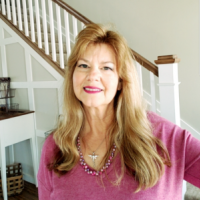 Hey there! I'm Leslie & welcome to my blog! I'm all about the Modern Farmhouse style. Here you'll find my design ideas, both for inside & outside the house as well as where I find all the great items I buy. You'll also see some simple DIY projects. I love sharing my knowledge & hope you'll stick around!

Hey there! I'm Leslie & welcome to my blog! I'm all about the Modern Farmhouse style. Here you'll find my design ideas, both for inside & outside the house as well as where I find all the great items I buy. You'll also see some simple DIY projects. I love sharing my knowledge & hope you'll stick around!

“As an Amazon Associate, I earn from qualifying purchases.”